I sold a monitor on eBay, buyer wanted to return the item because it’s not the right resolution and admitted it was listed correctly and was working well,and I’ve got that proof in the messages  I declined because I’m not excepting returns only if faulty.

buyer opened up a case with ebay and ebay close the case in my favour.

buyer opened up a case with PayPal and PayPal send a email the same day as the case with ebay so I think it’s connected so ignore it as it’s been settled.

ive been having trouble with my phone and internet ,the emails where  not updating for about week in the meantime I’ve had more emails of PayPal about the same case and I find out a separate case has carried on with PayPal without my knowledge and ended in his favour because I was unable to respond.

and in that case he has lied and said the item was described wrong he said it was listed 1440p resolution which it was not as all you got to do is look at the listing and it’s listed as 1080 resolution.

ive been trying to appeal and show them the evidence from ebay of him saying it was listed correctly and was all good working order and the ebay listing but they are not letting me, and I can’t seem to get a copy of the message centre transcript.

There trying to say  they have looked at my appeal and because I’ve never answered the emails case closed, but in that appeal I wanted them to look at the new evidence which they won’t because it would reverse the decision.

I had the right to appeal within 10 days with new evidence and information and you’ve reopened and Shut the case without telling me how to upload the evidence then I speak to someone who sends me a link  to upload but it’s to late.

My right of a fair appeal has been denied and not investigated.

I would also like a copy of the messages which I was told was available when I end the chat and it wasn’t.

and I will be taking this up outside of PayPal.

and a case against mr Morgan for slander. 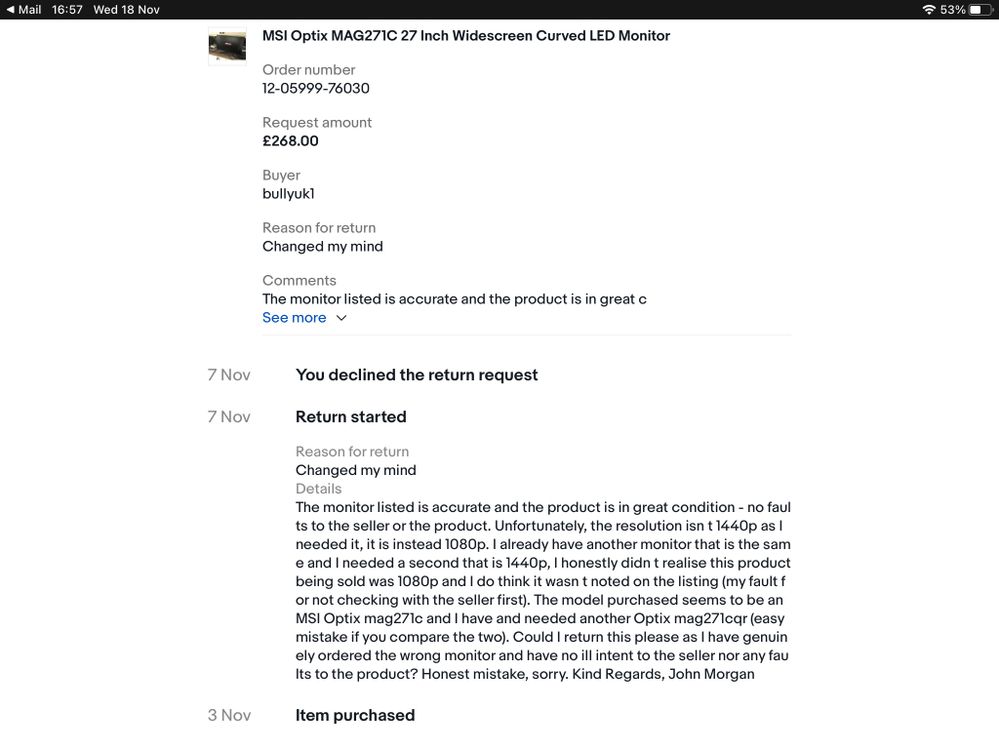